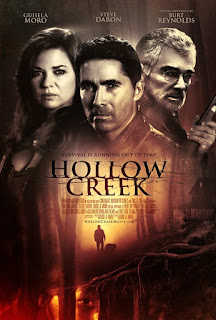 For my review this time I have a horror/thriller by actress, director, and screenwriter Guisela Moro, Hollow Creek.
Collaborating screenwriter Steve Daron plays author Blake Blackman. Blackman travels to do a retreat in a cabin in the with Angie, the woman he is having an affair with, played Guisela Moro. Blake is going to the cabin to write his next horror novel. On the trip to the cabin they hear an Amber Alert and hear that there are several boys missing in the area. Soon after they arrive Angie’s dog starts acting strange like there was in the woods. Meanwhile Angie goes to the local doctor because she has been sick for a couple days and is shocked to find out she is pregnant with Blake’s child. In a twist of fate, on her way back to the cabin she sees a rusty old white car with what she realizes is one of the missing boys in the back. She follows the car to a house in a remote area of town. There she is caught by the husband and wife who have stolen the boys. The wife finds out that Angie is pregnant and convinces her husband to lock up Angie and keep her alive until she has her baby.
Meanwhile Blake is the prime suspect in Angie’s disappearance and spends months trying the mystery of what is going on in the small town.
I have to say that Guisela Moro and Steve Daron have written a wonderful script full of tension and strong characterization. Guisela shows herself a real talent as she takes on the hats of director and screen writer, as well as delivering a powerful performance as Angie. Former superstar Burt Reynolds also gives a wonder performance in the role as the rich Grandfather of one of the missing boys. All in all this is a well done thriller with a bit of ghostly action as well. If you are looking for gore this won’t be the film for you, but is you want tension and drama this is the film for you.
All I can say is I highly recommend this film and I look forward to Guisela Moro’s next film.

Posted by Horror Bob at 5:02 PM No comments: