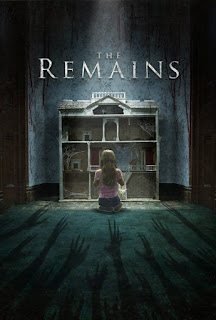 When a recently widowed man (played by Todd Lowe) named John moves his kids into an old Victorian house his kids find an old box full of 19th century antique items. Unknown to any of them these items are curse by a malevolent spirit of a murdered medium.
I have to say I loved this film. It was a very well constructed ghost story. Maria Olsen plays the murdered medium and though she has very little screen time she makes a strong impression. Todd Lowe does a wonderful job as the grieving father. The real surprise in the cast is Hannah Nordberg who plays the youngest daughter. Not since the character of Carol Ann in Poltergiest has there been as memorable the performance this girl presented.
The only real weakness in the cast is the part of the oldest daughter, which is played by Brook Butler. Unfortunately, Brook seems a bit more mature than the teenager she is supposed play. This made it hard for me to believe her in the role of a sixteen year old. I had a similar situation in the early 90s when Charles Band cast a 22 year old in the part of a 12 year old. But even with this minor issue director Thomas Della Bella delivers a film with good characterization, tension, and plenty of chills.
All I can say is I had heard a lot of good things about this film and I can honestly say that it lives up to its hype. I highly recommend this film to anyone who loves a good ghost story…