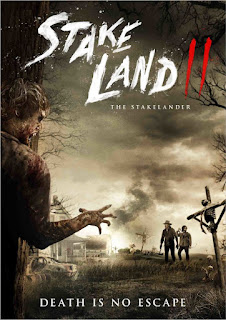 Well, I just finished watching Stake Land II. I have to say as much as I loved the first film I love this one better. In this film Martin (played again by Conner Paolo) and Mister (Nick Damici, who is also the writer of the film) are reunited when Martin's family is murdered by a female vampire with one eye. Martin finds out from Mister that this vampire is actually after him. It seems that this vampire is a new breed that can have babies and Mister had killed her baby and took her eye. Now Martin, Mister, a feral girl Mister befriended along with some vampire hunter friends of Mister must take on an army of vampires and the crazy cult the brotherhood from the first film, who are working with the vampires.
This is a great zombie apocalypse style film done with vampires instead of zombies. I highly recommend it.