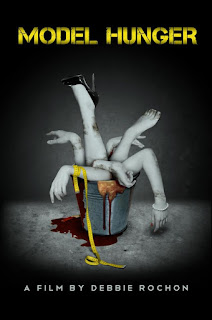 Well, this time I get to review the first directorial by my dear friend and the queen of all scream queens, Debbie Rochon. The film is titled Model Hunger and it is a quirky horror film that takes on the subject of the prejudice in the modeling and entertainment industry in general about female age and body size.
Model Hunger tells the story of Ginny (played to perfection by veteran actress Lynn Lowry), an elderly former model and actress who was cast aside as a young woman due to her body type. Ginny is now a broken woman who has over the years garnered a hatred and need for revenge on the thin young women who cost her her career. So, now when she encounters young pretty women she lures them into her house, kills them, and eats them. Now, come on the scene Ginny’s new neighbor Debbie (played by scream queen Tiffany Shepis). Debbie is a disturbed woman who starts to wonder about her neighbor’s activities. Debbie’s husband Sal, disregards her suspicions and ends up losing his life over it when Ginny sends over a little drugged treat for Debbie and Sal ends up eating it. After that things build to a final confrontation that pits Ginny and Debbie in a life and death battle.
I have to say this film sold me. It takes place in a twisted world that only a former Tromet could come up with. Mainly the stage of this twisted morality play takes place in three houses, Ginny’s, Debbie’s, and the neighbor on the other side of Ginny who is basically an old man with two hobbies, collecting windmills and peeping on the neighborhood. Then the film goes that much further for psychological affect by going into both women’s minds through voiceovers and creepy flashbacks.
But Rochon isn’t done there. After all she mentored with the great Lloyd Kauffman. Rochon hits the viewer with a blatant display of what the moral push of this story is through the vehicle of an infomercial show that plays through the story called Suzie’s Secret. Suzie’s Secret is a show hosted by Suzie (played in a fat suite by actress Suzi ) for “regular sized” women in order to sell them sexy clothes to make them feel empowered. The main clothes model in this freak show is none other than drag actor and Troma alumni Babette Bombshell. Babette thrills and shocks the viewer by modeling skanky outfits while rubbing food over his/her body. Scary indeed.
And, don’t worry, gore hounds, Debbie Rochon doesn’t forget you either. This film features some wonderful gore scenes as Ginny takes out cheerleaders, an aspiring actress, a mechanic, and even a Jehovah’s witness (because after all we can’t let those skinny Jehovah’s witness girls get away). And the best thing of all is not one CGI gore scene in the lot. Debbie Rochon goes for the best, and that is what has always worked, practical FX.
The last few years we’ve seen a lot of scream queens try the director’s chair. For the most part their efforts have been lack luster, and in many cases down right embarrassing. Not so in this case. I look forward to Debbie Rochon’s next directoral…
So, if you love twisted, gory, psychological, horror that is done with the love and respect of the craft, Model Hunger is the film for you.
Currently, this film is doing the film festival run, but it should be coming to DVD and Blueray sometime in 2016. I highly recommend you check it out if you get the chance. This will be one you will want to add to your collection in the future. 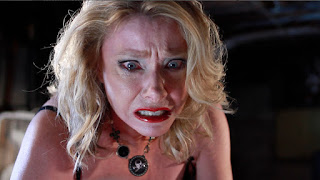 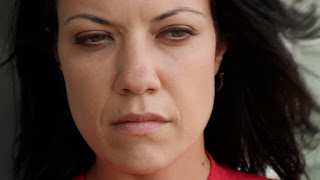