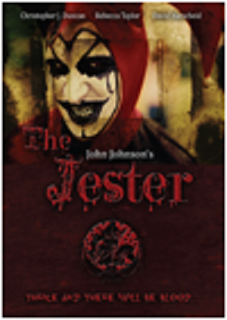 This time I have the pleasure of reviewing a film by one of my favorite indie filmmakers, that being Mr. John Johnson. The film in question is John Johnson’s The Jester.
There is a legend about a jester who fell in love with the daughter of a king and impregnated her. The King in his rage had the Jester tied to a tree and forced him to watch as he cut the child from his daughter’s stomach. Then the king burned down the forest to destroy the jester, baby, and his daughter’s body. While the Jester burned he cursed the king and the world saying that he would come back and claim a child to replace that which the king took from him, then the world would suffer his wrath.
Centuries later a young female author finds a necklace and a book in an old book shop. She buys the book and after she starts to read from it the Jester appears to her. He tells her he has come to get what she owes him, a child, and if she rejects him three times blood will be spilt. She refuses him and he reminds her that if she does it two more times blood will be spilt. Then he wipes her memory.
Soon after a bunch of her friends come to spend the weekend with her. The jester comes to her again and she rejects him two more times. The Jester tells her that she has made a grave mistake. From that point on blood is indeed spilt and the young author must choose either to concede to the demonic Jester’s request or watch her friends die one by one.
The Jester is a low budget horror film done in the classic style of the 80s. Unlike most films that try to capture the feel of the 80s gorefests, Johnson manages this feat with ease yet does not turn this film into a cookie cutter 80s horror homage. This is not a homage it is an after affect of the fact that like those 80s filmmakers before him Johnson uses his limited resources to their full advantage and effect rather than trying to pretend he is making a film. The result is good honest filmmaking that takes practical FX and character work, and tight script writing and uses these to create a quality piece of work. Jester reminds me of some of the great classic low budget horror films created by the master filmmakers of Empire Pictures and Full Moon. It is an entertaining horror film that doesn’t take itself too serious yet gives the horror fan the bang for their bucks. I highly recommend this film. You can find this and other wonderful films by John Johnson at http://www.darkstone-ent.com/films.html