Review: Land of Smiles, aka Thai-Sanity 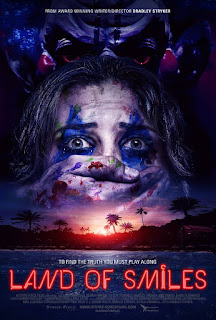 Review: , aka Thai-Sanity
By William Pattison
For Horror Bob’s Blog

For my review this time a have a new film by Australian director Bradley Stryker, .
The film centers on a girl named Abby (played by Alexandra Turshen). Abby has just gotten out of college and is ready to start her life. Her best friend, Jen (played by Jen L. Burry), wants to take Abby on vacation to purge her inhibitions, since Abby is a bit of the good girl type. Abby tells Jen she doesn’t want to go. This starts an argument. Abby tells Jen it has nothing to do with Abby’s boyfriend Brad. Jen walks off in a huff. Abby ends up going home to find Brad having sex with another girl. Abby shoots them both in the face with pepper spray. Then we see Abby on a plane alone to , not a good idea. Once she gets to Thailand Abby meets documentary filmmaker Ben (played by Keenan Henson) and his girl Jewel (played by Caitlin Cromwell, aka Caitlin Stryker). The threesome decide to travel around together because Ben has been all over the island and knows the best places. Then they add an Australian, Dale (played by Bradley Stryker) and Penny (played by Krista Donargo) It is around this time that Abby receives a video that is handed to her by a stranger. The video shows her friend Jen tied up and painted up in clown makeup. There is a man with her in a yellow jumpsuit and a disturbing clown mask. The man tells Abby that if she doesn’t play his game and do as he says that he will cut Jen to pieces with an electric saw. He tells Abby not to tell Ben or Jewel as well. Abby immediately goes to Ben and Jewel and shows them the video. Ben tells her not to worry because he figures it is Jen pulling a trick on Abby to help get her out of her shell. He backs this up by showing her a couple of videos of people pulling a similar trick. Abby doesn’t believe him and wants to get the police involved. Ben reminds Abby that the police are corrupt will only help if they are paid enough. He suggest she just go along with the game and that he is sure it’s all a big joke. The next day Abby is given another not from the clown masked man. He tells her that now that she has told Ben and Jewel they must play the game too and if any of them fail to go by the rules Jen will suffer. They decide not to tell Dale or Penny what’s going on, since they don’t want them involved. It is a little bit later that they find out this is all no joke when they find Penny, painted up in clown makeup, murdered in a motel covered in sheets with clown scrawl over them with blinking green, red, and blue Christmas lights as well. It is also soon after that they receive a finger in a package and a pendent Abby gave Jen. Now the game has become serious and the tension builds to the twist at the end.
I have to say that this is a very well done psychological horror film that also exploits the setting very well. You have an American tourist in a strange country where she can’t even count on the police for help. Bradley counters the incredible beauty if with it’s darker underbelly.
The actors give excellent performance, especially Alexandra Turshen and Keenan Henson as Ben. Bradley Stryker adds a lot to the film as Dale as well.
Of course, now we got the downside of the film. I honestly did not think the clown motif worked well with the setting. I know clowns have been the big thing the last few years with the clown sightings and attacks all over the globe. Also I understand that clown masks are the easiest thing to find, but I just don’t see clowns and as a good match. It all looked cheap to me and thrown in. The backgrounds in the videos of the clown who was supposedly keeping Jen in a secret place in didn’t match up with the rest of the film. Also, the big twist and reveal could have been done far better. I was less than impressed with the execution and it brought down a really good build up. Though I doubt Bradley Stryker is going to read this review, I hope he does a better job ending his next film.