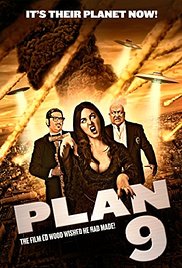 Well, after three failed attempts I have finally got to see the film I’ve waited to see for four years, that being John Johnson’s Plan 9.
This film is the epically expanded remake of Ed Wood’s cult classic Plan 9 From Outer Space, the film dubbed the worst film ever made.
In this film Brian Krause (Charmed) stars as plane pilot Jeff Trent who is thrust into a plan to destroy humanity by aliens who are reanimating the dead as an unstoppable army. Who does get to help him? Well, one of the town’s deputies, played wonderfully by director John Johnson, and fake psychic and irritating actor Criswell, played by former San Francisco Bay Area Horror Host Mr. Lobo. Can and his band of heroes save the world from the alien and zombie threat? Well, you are going to have to get a copy of this new cult classic and find out for yourself.
John Johnson takes Ed Wood’s tacky and whacked out B movie and turns it into an epic cult film that I can honestly say rivals Dawn of the Dead when it comes to zombie films. Zombie film lovers will love what Johnson delivers. He even has shots the homage George Romero’s cult classic, Night of the Living Dead. This film is full of cameos by cult horror icons. Carmille Keaton (I Spit on Your Grave) plays the part Vampira played in the original. Also, the original Plan 9 From Outer Space alumni Conrad Brooks makes an appearance along with Hari Krishna zombie from Dawn of the Dead, Mike Christopher.


This film, which took John Johnson seven long years to finish, is a love letter to the horror genre. Truly it is a piece of art that was carefully crafted with the love of a true filmmaker. It shows in every shot and edit. Something you rarely see in the horror community these days with all the lack luster and slapped together crap that seems to be considered genius these days. This is true genius and I can’t strong enough recommend this film.