Movie Review: All About Evil 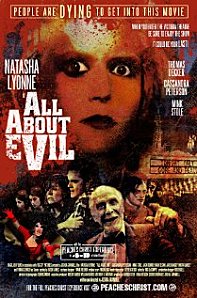 Movie Review: All About Evil
By William Pattison, aka Eric Morse
For The Horror Bob Blog
I recently saw an amusing slasher film titled All About Evil. This film tells the story of Deborah Tennis, who is played masterfully by American Pie alumni Natasha Lyonne,. A rather mousey librarian inherits her father’s beloved, but failing movie theatre. In order to save the theatre, Deborah starts enticing gore hounds with a series of short films…but the horrifying the truth that the gore fans don’t realize is the murders presented in the films are real.  But when his girlfriend mysteriously disappears horror fan Steven starts getting suspicious and realizes the horrific truth.
This film reminds me of the early slasher films of the sixties and early 70s, like the films staring Vincent Price…Theatre of Horror and Doctor Phibes. Though this film does have gore scenes, its focus is on bringing you memorable characterizations and plot development. It also makes bold statements about modern horror films and the fans obsession with gore.
The cast is fantastic. I was thrill to see horror icon Cassandra Peterson in a role other than Elvira. Jack Donner gives a creepy performance as Deborah’s assistant, Mr. Twigs. Also, there are Deborah’s other murderous associates The twins, played disturbingly by Jade and Nikita Ramsey.
On a personal note, I loved the scene in the film where an Elissa Dowling look-a-like get her tits sliced off by a guillotine in a rather humorous gore scene.
If you are bored with the typical formula slasher film, then this is the film for you. I highly recommend it.
Keep on Creepin', The Horror Bob Blog...
Posted by Horror Bob at 6:57 PM